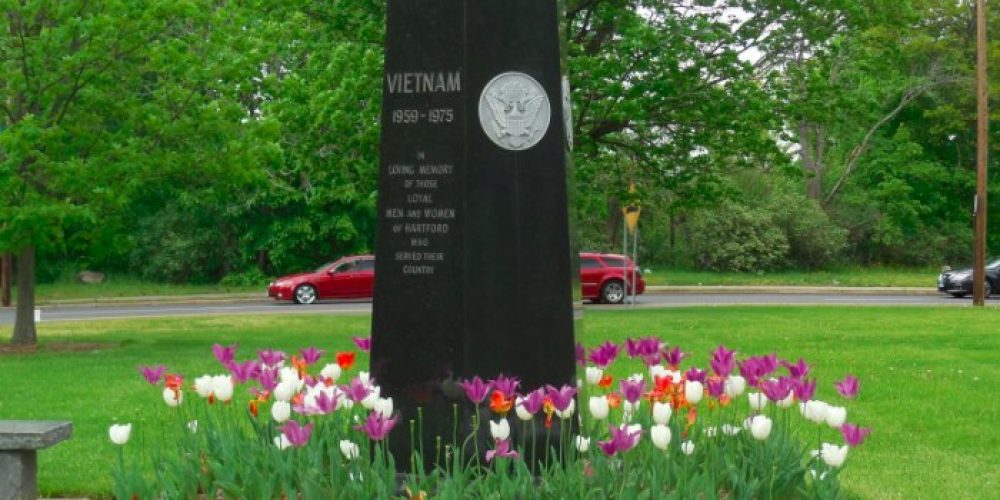 Greetings,
It has been forty-four years since the last official battle of the Vietnam War ended at Koh Tang Island. Thirteen years and one month later Hartford Boy Scout Troop 105 decided the forty Hartford citizens who never returned from the Vietnam War deserved a memorial in the City of Hartford.

With the generous support of the Hartford community the Troop raised $40,000 for the memorial and secured a commitment from the City for ongoing maintenance and lighting within six months. On Veterans Day in 1988, Troop 105 presented a 40-foot flagpole to the City of Hartford in a ceremony marked by a proclamation from then Mayor Carrie Saxon-Perry establishing the Hartford Vietnam Veterans Memorial at the green located at the intersection of New Britain Avenue and Fairfield Avenue.

On Memorial Day, May 29, 1989, the Memorial was completed with an unveiling marked by a parade and dedication ceremony in which the Scouts of Troop 105 raised the American flag and placed a wreath at a monument inscribed with the names of those Hartford residents killed in Vietnam.

Since then, Troop 105 has returned to the Memorial twice each year on Veterans Day and Memorial Day to honor all who served from every town, every war and every service and to remember the forty Hartford citizens who never returned from the Vietnam War. Many of those years this was the only formal ceremony honoring our veterans in the City of Hartford.

At 9:30 AM on Monday May 27, 2019, Boy Scout Troop 105 will begin its thirtieth annual Memorial Day Ceremony. This year we are making a special effort to encourage all those who were part of the dedication and those who were involved in the extraordinary grass roots effort to establish the Memorial to return to the green located at the intersection of New Britain Avenue and Fairfield Avenue and be a part of the Ceremony.

Troop 105 requests your presence at the Hartford Vietnam Veterans Memorial Day Ceremony on May 27, 2019. Those who were involved in the Monument planning and/or dedication ceremony will receive an invitation letter at a later date.

Please feel free to contact Committee Member Bill Gervais if you have any questions.

View all posts by William Gervais →

SAVE THE DATE Greetings, It has been forty-four years since the last official battle of the Vietnam War ended at Koh Tang Island. Thirteen years and

This "Save The Date" invitation went out today to 53 out of 58 Troop 105 Eagle Scouts. If you have trouble viewing the email, see the attached file be

Looking forward to an amazing 2019 for the Boy Scouts of America Troop 105! What is your new year's resolution? How about getting involved wit